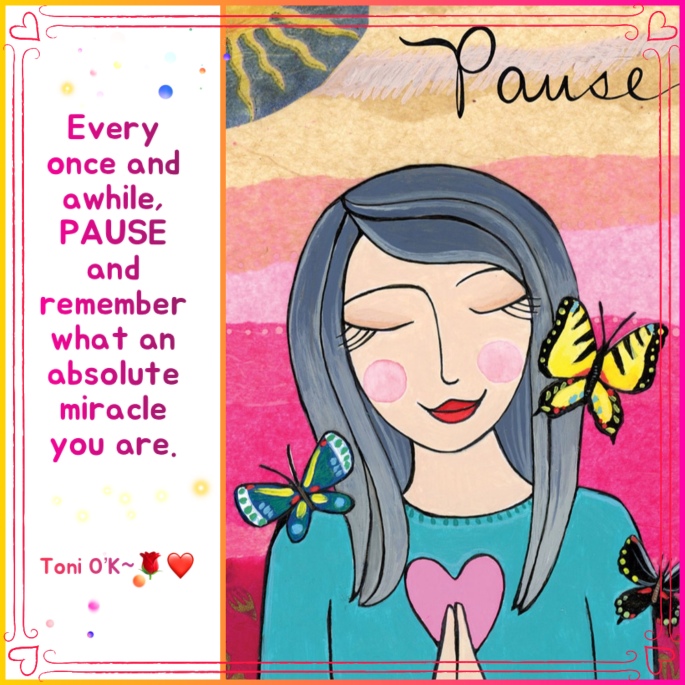 As you breath in, inhale the belief that you are worthy of love, happiness, healing and all good things.

Accept that your hopes and dreams will come true.

Allow the essence of this belief to seep into every fibre, every thought and every corner of your mind, body and soul.

As you release your breath, exhale all doubt, regret, shame or judgement that has found its way into your psyche.

Let go of the words, opinions and lack of confidence others might have planted in you.

You are a beautiful masterpiece under construction. You have barely begun to tap into your potential.

Every once and awhile, PAUSE and remember what an absolute miracle you are.

Now, go out and have exactly the kind of day, week, month, year, life you want to live. 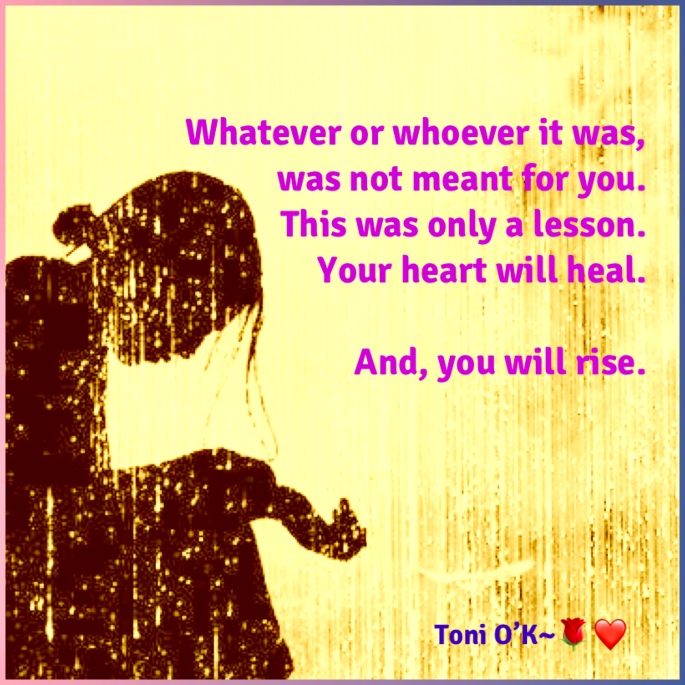 Not everything or everyone, that comes into our lives is meant to stay.

Some things, some people, come to challenge us, others to inspire us and some to teach us.

When they leave, let them go.

Trust that this experience was only meant

to last a little while.

Something better is on the way.

Whatever or whoever it was,

was not meant for you.

This was only a lesson,

Your heart will heal

and you will rise.

As a global village, we have proven that we have the capacity to come together in times of crisis.

We see this unity in action as the world rallies to assist with the fires that devastated Australia.

In the summer of 2018, we were knit together by our common concern for 12 members of a junior football team and their coach who were trapped inside the Tham Luang Nang Non cave in Thailand.

We all stopped and wept as we watched Notre Dame cathedral burn and members of our global community rush to offer assistance to rebuild.

On September 11, 2001 we came together as a global tribe in support of family, friends and strangers in the US as the twin towers and a wing of the pentagon fell.

The world united with Canada in our grief over the tragic bus accident that claimed the lives of 16 Humboldt Bronco athletes and coaching staff in Saskatchewan.

We have been united during events such as earthquakes, volcanic eruptions and industrial accidents, proving that our ability to be compassionate and loving to one another despite our borders, religious beliefs, race, gender, financial status, is strong. And, demonstrates that as a global village we care deeply for one another.

How is it then that on a day-to-day basis human beings can display such selfishness, corruption, racism, greed, insensitivity, anger and cruelty?

If individually we have such capacity for compassion and love, why is our world in peril?

Could it be that our constant quest to segregate into territorial clusters organized by race, religion, gender, social status and even monetary systems, is causing this peril?

We have created boarders that keep us apart and cause friction. We have artificial levels of power that create the inference that some have more power over others. It is most often this segregation and lack of tolerance that is the focal point of anger, hostility and dispute.

Until we start seeing ourselves as “the same” and celebrate our sameness rather than continuing to create friction around our differences, the world will not change.

Yes I know we are all not exactly the same, but my point is, we focus too much on the things that separate and make us different rather than celebrating the things that make us the same. All human beings are 99.9 percent identical in their genetic makeup. It is the titles, the flags, the shrouds, the idols and the cloaks we drape over ourselves that create our separateness.

The good news is, a light is shining in the hearts and minds of many people around the world who understand that we cannot sustain the planet the way we are currently living.

We see this understanding in the efforts being taken by healthcare and educational professionals who are providing services and support at no cost to some of the most vulnerable people in the world.

Trades people, technology experts and engineers from around the globe constantly step up to help rebuild communities, villages and homes.

There are business leaders taking action around environmental sustainability and human rights practises that are making a differences around planet. Individual philanthropists are making huge financial contributions to improve the living conditions and the lives of complete strangers. Youth around the world are rising in solidarity over environmental and human rights issues.

What this tells me is that it will not be governments, religious organizations or large corporations that will lead the change we seek, it will be private citizens that come together to drive change.

Of course we will never all agree on all things, that’s impossible. But we can deal with things respectfully, humanely and in ways that don’t start wars, destroy our environment or cause starvation.

I can hear the eyes rolling and brains thinking “OMG she is so ridiculously idealistic.”

Maybe, but hey, what if we all were?

There are days when I step away from things, all things.

I pull out my boots, umbrella, bundle up and venture into the rain.

Each droplet cleansing the air and washing the heaviness in my soul away.

The noise of the world and the noise in my head is held at bay against a backdrop of a billion tiny, healing raindrops, tapping in unison on everything around me.

I synchronize my breath and the pace of my steps to their collective medicinal rhythm.

Then, I feel it, the parts of me that are hurting, begin to untangle, relax and fall from me into puddles of sorrow, regret and relief. I can now leave these things behind,

Whatever it was, no longer feels so bad.

My heart begins to heal.

Sometimes a walk in the rain can fix everything.

No one has broken my heart more than I have.

It’s our own expectation of others that let us down and break our hearts.

If you expect another person to;

~ heal the pain from your past…

~ make you feel whole or “complete you”…

~ be a mind reader, and understand what you need…

Only you can heal your heart, make yourself happy, and heal the parts of you that have been bruised. And, you have an amazing capacity to do just that.

Once you realize that everything you need to heal your broken heart is inside you and not inside someone else, everything changes.

Looks can be deceiving,

Words can be misleading,

Deeds can be self-serving.

True Beauty should not be defined

by how we look, how we dress ourselves

or what we say.

Beauty is found in;

Our acts of kindness,

Our acts of love and

Our acts of humanity.

Beauty is found in the heart and soul, not on the body💕

We’re told to go out and chase our dreams.

We’re also told NOT to chase who or what we desire but to trust that the universe will provide.

So, which is it? Do you wait for your ship to come in? or, do you swim out to it?

I think the answer is, both.

Most of the time we have to trust our instinct and chase the things we desire or the goals we want to attain.

Then, there are times in life when we feel lost, weak, have a cluttered mind or a spirit that is not at peace. Its at these times that we have to surrender and trust that the universe will take over and guide us.

We are the pilots of our journey, but sometimes we need to flip the auto pilot switch and trust that we’re going to land where we’re supposed to.

We don’t wake up and think “gee, I have to pump my heart, or move the blood through my veins or breath air into my lungs,” we trust these things are going to happens – and, they do.

So, swim out to your ship. If you lose your way in the swell or the elements become too much to bear, lay back, float and trust that the current will carry you to where you’re meant to go. 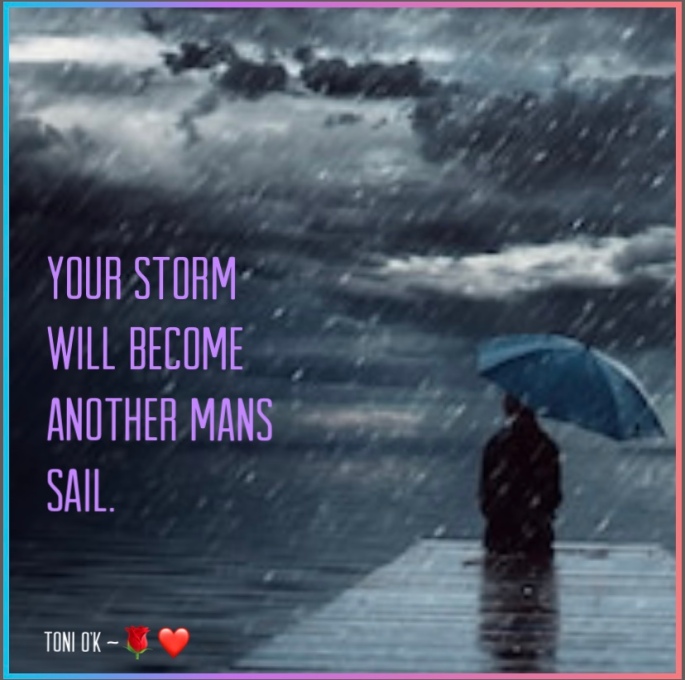 WHATEVER YOU NEED TODAY

The thing you’re searching for?

Stop searching for it and BE it.

Give away the thing you seek.

If your searching for happiness, BE happy.

If your searching for love, BE loving.

If you seek abundance, be generous.

If you need comfort, be a comfort to someone who’s hurting,

If its meant for you, it’s in you to give.

The most unexpected treasures reveal themselves not when we’re looking, but when we’re BE’ing.

BE what you need 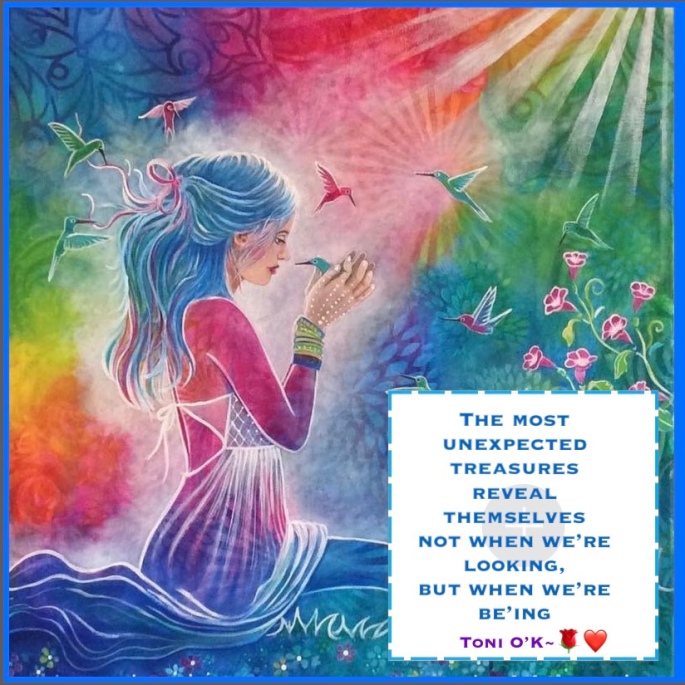 Yesterday’s page may have been a disaster,

but today the page is blank,

It’s clean, its filled with possibilities.

You have the experience from all of your yesterdays to draw on.

Every single day we have the opportunity to;

to be whatever we want to be.

As some things end,

Perhaps it’s time to write the end of this chapter,

turn the page and start a new one.

Go write yourself a beautiful life❤️ 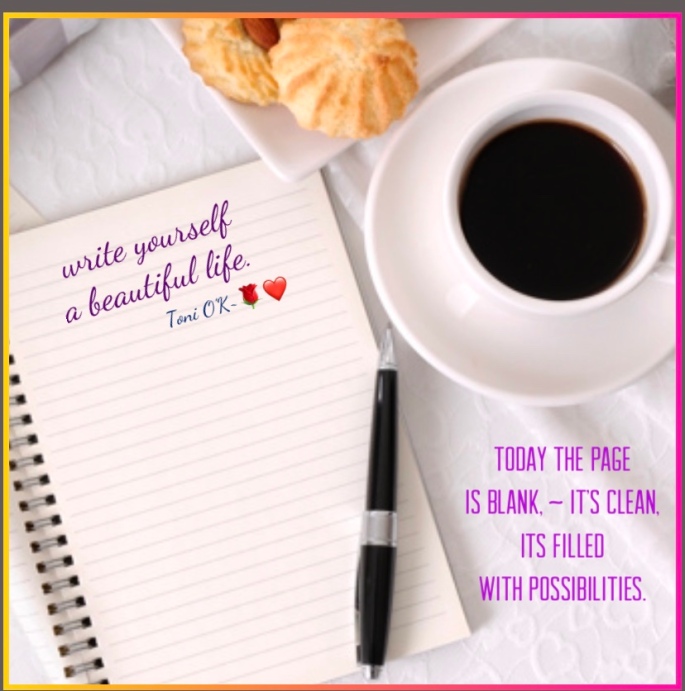 Life is meant to be beautiful, even when its hard, as long as we are learning and growing, life is what it should be, an extraordinary adventure. TO'K~ The Whimsey Angel